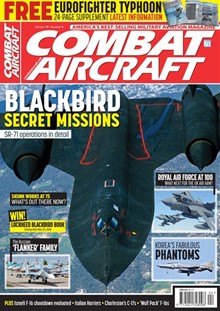 As well as being visually stunning, Combat Aircraft offers readers a large amount of detailed information and thought-provoking opinion on topical military aviation issues. Combat Aircraft also offers you unprecedented access into squadron crew rooms, and straps you into the cockpits of the world’s greatest military aircraft!

Take advantage of one of our fantastic subscription offers today!

Add your review of Combat Aircraft